We are a diverse, multi-site church in South East London. Although we can't currently meet together in person, we're still gathering online. We’d love you to join us on a Sunday.

We believe that church should be a place where we not only attend, but also belong, a place where no one stands alone. Connect with others, find friends and play your part.

Ask your questions and explore Christianity in a non-threatening, relaxed and friendly atmosphere.

We believe in the declarations of Isaiah 61, and so seek to extend God’s love in practical ways to the hurting and helpless in our local communities through our social action ministries.

Grow in faith and deepen your walk with God through our weekly sermon podcast and blog, and several worship albums with songs from members of King’s.

At King's we teach the biblical principle of stewardship. We believe that everything we have belongs to God and we are only looking after, or are stewards of, what He has given us.

An important update on how we’re responding to the issues of race and justice.

If you missed my message Racism, the Gospel and the Church, it’s available here.

In my recent message on Racism, the Gospel and the Church, I encouraged all of us to keep educating ourselves on this vitally important issue. I have therefore asked our Teaching Pastor, Andrew Wilson, to update his list of recommended resources on the subject, which he first posted a couple of years ago. There is a great deal of excellent material available, and it can be difficult to know where to start, so thank you Andrew for this helpful list:

1. Christian Smith and Michael Emerson, Divided by Faith: Evangelical Religion and the Problem of Race in America. This is the first book I read when I was trying to learn about this subject, and although set firmly in an American context I found it enormously helpful.

2. Duke Kwon’s message at LDR on Speaking the Truth in Love. One of the best messages on anything I have ever heard, from a hugely thoughtful Korean-American who has written and spoken a good deal on issues of race.

3. David Anderson’s books Gracism and Letters Across the Divide. David was the inspiration for our Gracism series a few years ago, and he has written some really good books on the subject, as well as being a great help to us as a church.

4. George Yancey’s message on Moving Beyond Racial Gridlock. Particularly significant in the current moment, Professor Yancey’s seminar provides an excellent analysis of both the problem, and the solutions the Gospel provides.

5. Ben Lindsay, We Need To Talk About Race. Ben is a friend of ours, having been a member at King’s a few years back, and he has lived his whole life in southeast London. Here he writes about the black experience in white majority churches, and his insights will instruct and resonate with many of us.

6. Martin Meredith, The Fortunes of Africa. A rather different sort of book, which gives a pacy and readable history of Africa, and puts the continent in context for us. This is probably the longest book on the list, but it’s an absolutely excellent read.

7. Thabiti Anyabwile’s Top Ten Tips for Talking About Race. Thabiti is a pastor in Anacostia, Washington DC, and he may be the spokesperson from whom I’ve learned the most on race over the last few years, through his writings and speaking ministry. Here he gives a brief summary aimed primarily at white people.

8. The messages from the MLK50 conference, in April 2018, are free to watch online and outstanding, especially those by Jackie Hill Perry and Charlie Dates.

9. Shai Linne, George Floyd and Me. Of the many articles written since the tragic murder of George Floyd, this is the best I have seen: raw, honest and yet hopeful.

10. For those who find it easier to engage through movies and documentaries, there are lots of excellent ones available (often for free) on the major streaming services at the moment, including Ava DuVernay’s 13th, David Olusoga’s Black and British, Ezra Edelman’s OJ: Made in America, Stella Corradi’s Sitting in Limbo and James Baldwin’s I Am Not Your Negro.

It was great to have an opportunity to interview Ben Lindsay earlier this week. Ben was saved at King’s and was involved in planting a church in Greenwich out of King’s Church London. He now leads the charity ‘Power the Fight’, speaks widely and advises on issues of race, justice and the local church. He published his first book We Need To Talk About Race in 2019, which I would strongly recommend you read. 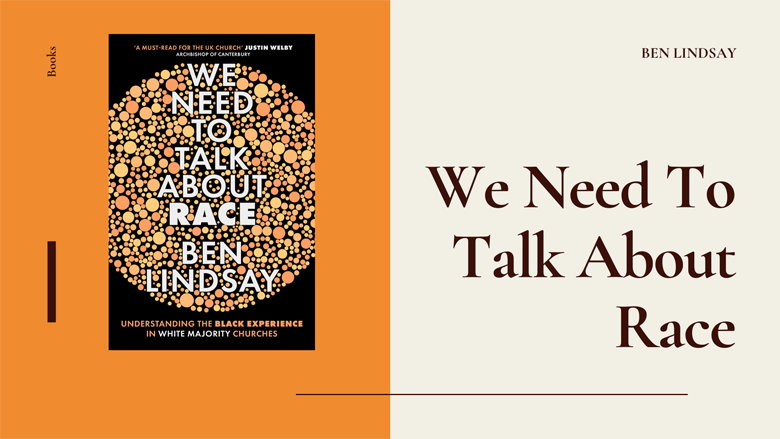 Praying for Our Nation

We returned yesterday from an excellent couple of days away with The Richmond Group. This is an annual gathering of leaders from some of the movements, networks and larger churches in the UK, hosted by Nicky Gumbel from HTB and Pastor Agu from Jesus House.

One of the highlights was a helpful discussion around the issue of diversity. As part of the programme, Nicky interviewed Ben Lindsay who recently published We Need to Talk about Race, about the black experience in white majority churches. He spoke with much grace, courage and honesty on this important subject. I have known Ben for many years, as he was saved on an Alpha course at King’s, and I recommend his book to you.

Building a diverse church is a high value of King’s. We have learnt a huge amount over the last couple of decades (and made many mistakes along the way!) as the church has become increasingly diverse, but there is always more to learn. If you are new to the church or interested in finding out more, I encourage you to take a look at Invited, our most recent teaching series on diversity.

The Richmond Group meets at Lambeth Palace, which sits on the Thames opposite the Houses of Parliament. We were highly conscious of the important political debates taking place across the river as we were meeting, and our time together concluded with a powerful time praying and calling out to God for our nation. As our politicians continue to be as divided as ever as to what should happen next regarding the UK’s future with the EU, it was good to finish with a reminder that we put our trust in a God far mightier and more powerful than any one politician or political ideology.

Steve Tibbert leads King’s Church London, with sites in Catford, Downham, Lee and Beckenham. Over the past fifteen years the church has seen continued growth, both in size and diversity. Steve is also involved in Newfrontiers and regularly coaches other lead elders. His book, Good to Grow, was published in July 2011. He is married to Deb, and they have three sons.

RACISM, THE GOSPEL AND THE CHURCH

THE CHALLENGE, THE COMFORT & THE CHOICE

THE WEDDING AT CANA

WHAT'S ON THE MENU?

THE ELEPHANT AT THE TABLE

THE ELEPHANT AT THE TABLE

A PLACE AT THE TABLE

THE WORLD AND MY TABLE


The service is also available to watch throughout the week.

King's Church London is part of the Newfrontiers family of churches